Today, tenants expect on-demand, fast and uninterrupted wireless connectivity. The introduction of 5G enables many revolutionary services and is seen as a must-have for building owners to attract high end tenants.

Damansara City is an award-winning development and is set on 8 acres in the exclusive district of Damansara Heights, offering office space, retail facilities, residential accommodation and a 5* star hotel.

One of the buildings is headquarters to a major Malaysian bank. Upgrading the building’s legacy 2G, 3G and 4G LTE network to include 5G will create a state-of-the-art smart building that will enable the bank to harness the full commercial and technological opportunities, such as increased security with a private network, enhanced in-bank customer experience and offer bespoke, personalised banking and financial products. 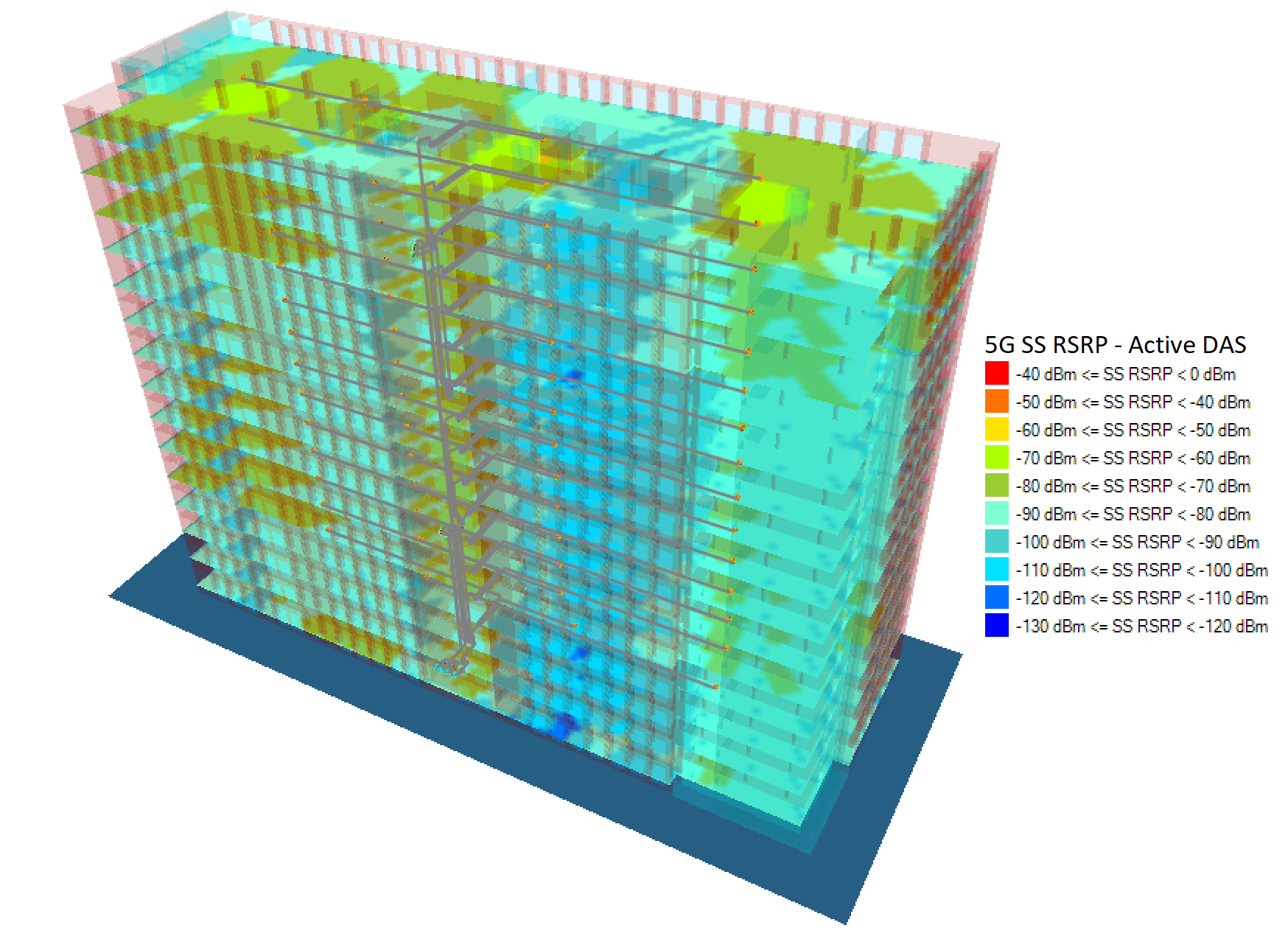 The purpose of this network design comparison was to demonstrate that Maven Wireless’ hybrid active DAS system could achieve the same level of indoor coverage, incorporating 5G, but with fewer base stations.

As is common with many  buildings  offering  4G today, this tower was fitted with a passive distributed antenna system (DAS) to support 2G, 3G and 4G LTE communications, and therefore not designed to support higher 5G frequencies.

Many building owners face technical and commercial challenges when upgrading networks as this requires careful consideration of many factors, such as current network infrastructure and components used, type of building materials, building layouts, signal interference from outside and nearby buildings, plus many more.

This tower, for instance, is made up of a mixture of building materials (concrete, wood, plaster board, coated glass) that can impact signal penetration into the building and distribution throughout.

Upgrading a network infrastructure is often expensive and time consuming. Building owners will be keen to find a commercially viable solution that can be rapidly deployed to minimise disruption to their tenants and their customers. The solution will also need to support multiple operators and legacy network generations as well as multiple frequency bands to deliver the quality of service expected by end users.

RF Engineers at Maven Wireless used the Smart CAD Extract feature in Ranplan Professional to easily import the tower details from the 2D CAD files. Building materials were selected from Ranplan’s database to faithfully create a virtual 3D model replica of the tower

At first Maven Wireless explored the possibility of upgrading the legacy passive DAS to support higher  5G frequency bands by simply replacing passive components. However, Ranplan’s network calculations predicted poor indoor wireless coverage because of weak signal strength caused by higher  pathloss  for the 3.4GHz band. It was established that a redesign    of the current network to include an additional 4 base stations, one for each frequency band, would be needed to enhance signal distribution and deliver 5G coverage.

Heatmaps produced in Ranplan Professional revealed that near identical indoor coverage for 4G LTE and 5G can be achieved using the Maven Wireless active hybrid DAS with only half the number of base stations. Both scenarios were configured with the same level of power output set at 43dBm to allow a fair comparison. In the passive DAS the power was set at base station level and for the active hybrid DAS it was set at the remote unit level. The latter set up offers increased flexibility for power adjustments compared to the legacy solution. 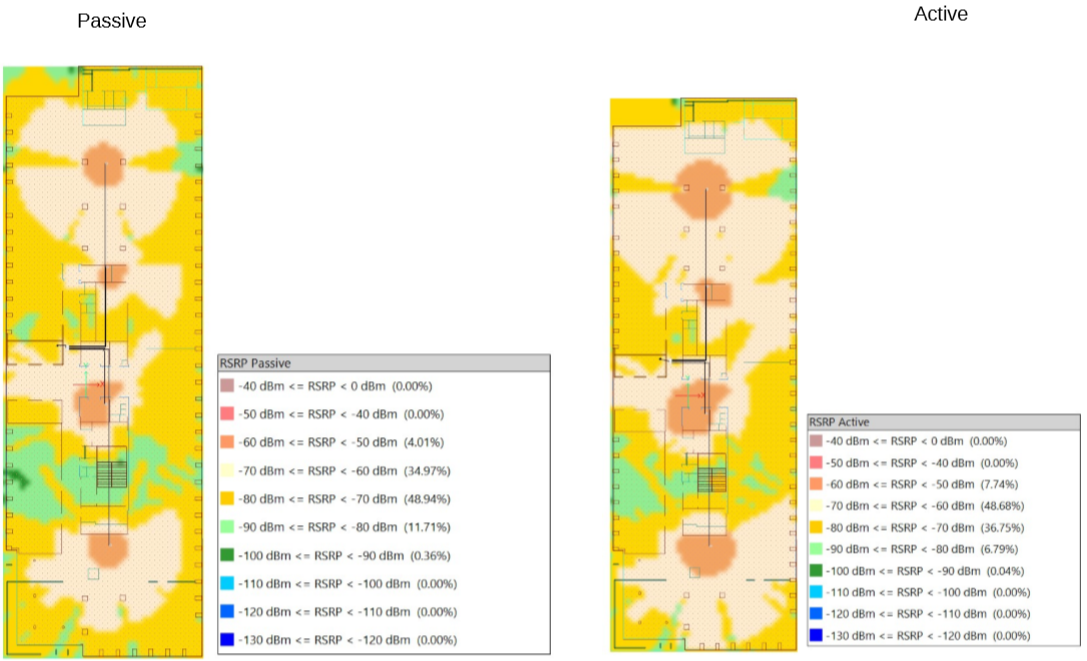 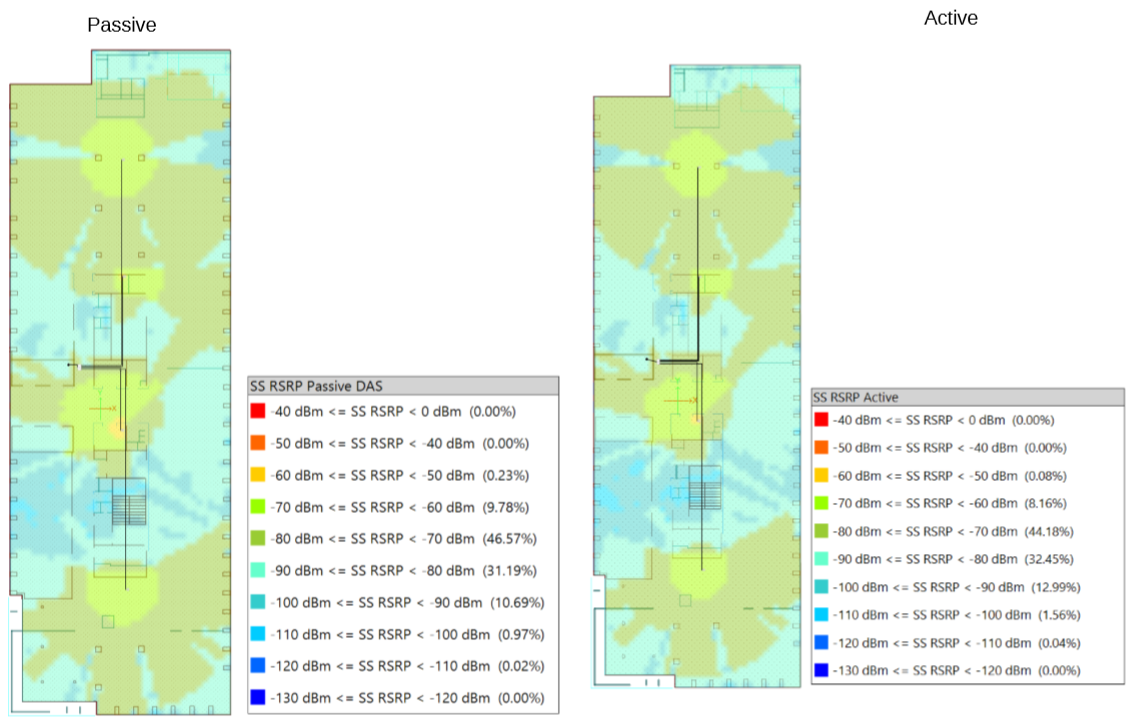 “In today’s competitive market it’s often a misconception that you have to compromise on quality or time when preparing an indoor wireless design, but Ranplan assures both quality and efficiency. So there is no compromise at all, on anything”
—  Brijesh Panchal, System Engineer, Maven Wireless

In conclusion, the comparative designs demonstrated that although the existing passive system could be upgraded, it would result in significant CAPEX and OPEX, and most likely need replacing or upgrading again to adopt future network requirements or technologies. Despite the need for additional hardware, Maven Wireless were able to use Ranplan Professional to prove that their hybrid DAS solution offered the most cost-effective and flexible solution to achieve the same level of indoor coverage performance.