Optimising the wireless network design to improve the service for millions of visitors at a large theme park in California, USA.

This 510 acre property in Anaheim, California, is home to a large theme park, 3 hotels, shopping district, restaurants and entertainment centres. The entire venue is flooded with millions of visitors using their smart devices to navigate the park, communicate meeting points, pay for consumables and immerse themselves in the experience using technologies such as Augmented Reality.

Optimising the wireless network will enable the Business Owners and Operators to harness the commercial opportunities that come with customers having access to seamless connectivity, which in turn increases customer satisfaction. 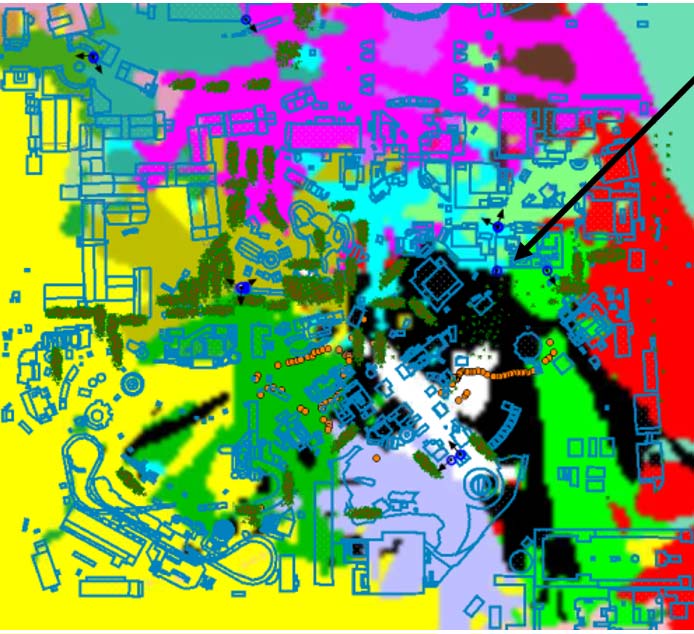 Many Operators face technical and budgetary challenges when optimising a network for a large venues, as this requires careful consideration of many factors.

The sheer number of people connecting to the network with multiple wireless devices, expecting the same fast service, creates a design challenge. It would not be cost-effective to deploy a network that catered for peak usage as there would be times when the park was closed with little or no attendance.

Due to the nature of this environment, it was common for the significant footfall to congregate in certain areas. To optimise the service within these popular locations, the RF engineers would need to consider the impact network changes would have on neighbouring cells. It’s a common challenge for adjacent cells to cause interference which results in degraded signal and poor network service.

The mixture of structures found in theme parks (buildings, rides and large signage) are often made of materials such as concrete and metal which reflect RF signals and reduce the service received by users. This can create difficulties when considering antenna placement and angles.
As visitor move around this area, it was important the network support the continuous connection from indoor to outdoor environments, so ensuring the neighbouring network cells work together was crucial to achieve a seamless user experience.

To tackle this complex project, Omega Wireless, a telecommunications solutions provider, chose Ranplan Professional to evaluate and optimise the theme park’s wireless network for two of the top 3 tier US Operators. RF Designers at Omega Wireless created 3 simulations for 7 of the 10 nodes in the park to predict and compare the coverage, quality and throughput results of changing the antennas’ tilts, azimuths, power and in some cases replacing the antenna entirely.

The Monte Carlo simulation feature was used to replicate the distribution of users across the environment which enabled the RF engineers to measure how the network uplink and downlink would perform once deployed, and how traffic loading would impact network throughput.

Using Ranplan’s heatmap simulations, Omega Wireless were able to produce a set of recommendations to the Operators for each of these nodes.

The table below shows how both the network traffic (orange) and network throughput (yellow) increased after the tilt and antenna changes were implemented on a heavily loaded node. Prior network performance can be seen alongside: traffic (blue) and throughput (grey).

The throughput performance improved by up to 240%, with an average of 50% despite there being higher traffic loading increased pressure on the network. The average user throughput of the overall cluster saw an improvement of 25%-30%. This is equivalent to adding 1-2 carriers to the venue which could have cost the Operators millions of dollars to achieve. 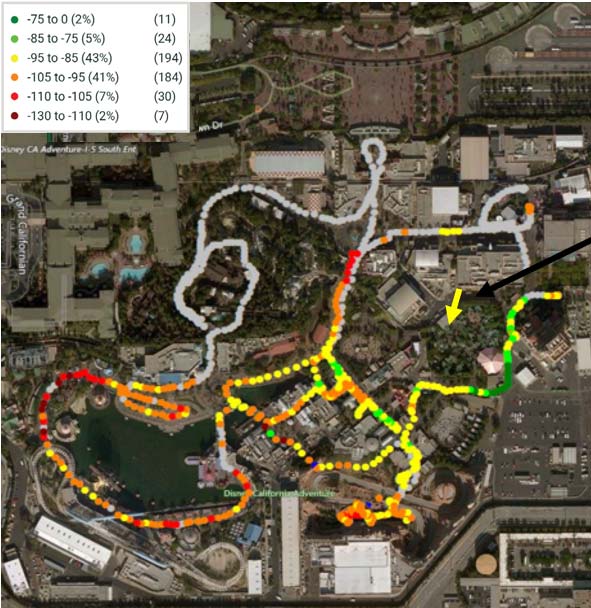 Omega Wireless created visual delta plots of the property in Ranplan Professional to evaluate the LTE 2100 RSRP (Reference Signal Receive Power) performance using PCI (Physical Cell Identifiers) as it was vital to enhance the service in the most populated areas. The visual showed that the majority of the route around the park received -95dBm or better. 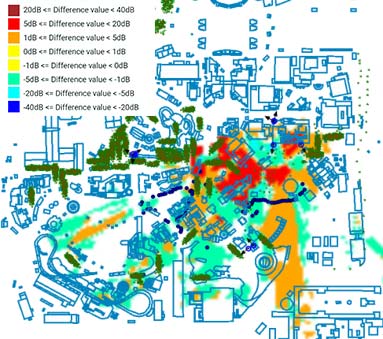 The heatmap delta plots showed the SINR (Signal to Interference plus Noise Ratio) was improved by up to 10% in the heavily populated service areas. Post deployment analysis identified the Ranplan predictions were extremely accurate with only 1% difference in some areas.

In conclusion, the recommendations from Omega Wireless using Ranplan Professional resulted in significant improvements to 2 major US Operators’ network service, not just in plots, but also measured in actual KPIs and experienced by the millions of visitors at the theme park and surrounding areas.

“Ranplan Professional’s ability to accurately simulate the network as a whole rather than cell by cell helped us to optimise the overall performance, reduce boomers and over-shooters effect and modify antenna configs to achieve better user throughputs in such a heavily loaded high profile venue.”
- Amr Albanna Ph.D., CEO, Omega Wireless - info@omega-wireless.com